The summer has flown by and autumn is almost here. Our annual family vacation to South Carolina happened in July, my oldest son turned 11 years old (!) at the beginning of August, school started for both my boys, and both Gen Con 50 and an eclipse happened. It’s taken me several days of getting back into the swing of things (and getting over con crud, which I seem to still have) to feel like writing anything of worth.

Really, this is just an update to let you know I’m still alive, as these things tend to go anymore. I will say that I received my copyeditor’s notes right before we went on vacation in July and worked on my last round of revisions and fixes as soon as we got home. It took me about a month, which is the fastest I’ve ever revised a full-length novel before. My copyeditor now has the final draft of When We Were Forgotten in her capable hands. Once she’s finished working her editorial magic, I’ll get to work on the interior layout, pick a trim size for the printed book, and upload the mf-er to CreateSpace.

At Gen Con, a well known fantasy author advised me to check out a certain publishing house that likes feminist science fiction. I’ve thought about submitting my manuscript to them, but after three and a half years of working on the story, I just want to get it out to all you lovely readers. I’m tired of waiting on other people to tell me it’s not what they’re looking for at this time, and I’m not ready for someone to say, “We like it, but it needs this and this and this before we’re willing to publish it.” Plus, I love the cover my friend, Devin Night, did for me. So, look for the print version of the novel to be published within the next month or so. EEEEKKK!

I think a round of pictures taken at Gen Con would be the best way to liven up this post. Here ya go: 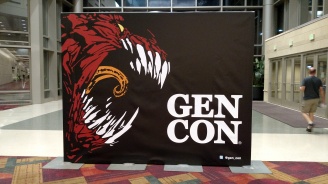 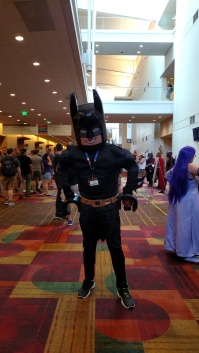 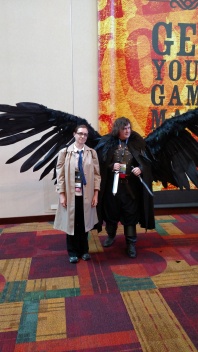 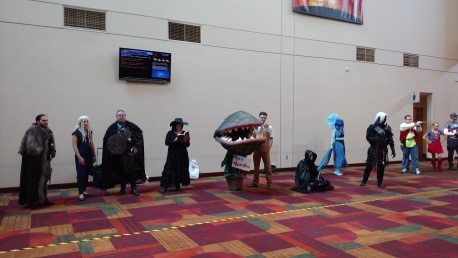 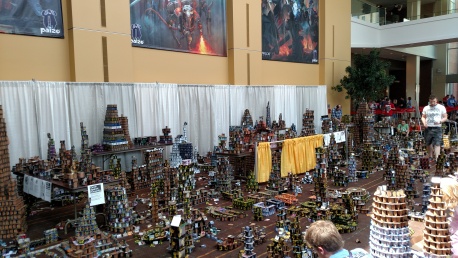 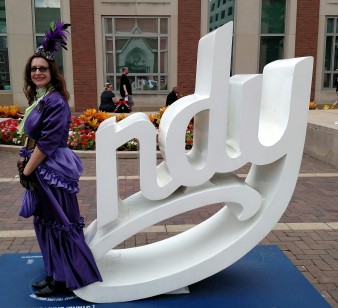 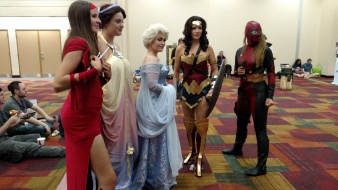 My version of Castiel from “Supernatural” was well received on the Friday of the con, and my friends and I had so much fun cosplaying the Scooby Gang in Victorian/Steampunk fashion on Saturday (I was Daphne, swathed in so much purple satin). I also spent four hours on Friday playing one of my favorite games (Marrying Mr. Darcy) with one of my favorite authors (Mary Robinette Kowal) for charity (Worldbuilders). All in all, it was the best Gen Con experience I’ve ever had . . . and not just because of the awesome costumes this year.

I’ll let you all know when the next book is released.

Until then, thanks for reading . . . and waiting.

Amanda Cook is a writer and stay at home mom who lives in Indiana hill country with her spouse, kids, and clingy dog. In the Before Times (and sometimes even now), she could/can be found helping out with her kids' school, catching up on her toppling TBR pile, playing games with her friends, hanging out at virtual conventions, crying over period dramas, or sewing yet another cosplay. Her second novel, "When We Were Forgotten," is the winner of the 2018 Bronze Medal for Best Sci-fi/Fantasy/Horror E-Book from the Independent Publisher Book (IPPY) Awards. She writes short speculative fiction and poetry that she also occasionally posts to her blog.

Make Me a Sammich