Actually, time doesn’t seem to fly when I’m writing because I’m such a slow writer.

Regardless, I’ve been MIA lately because I’ve been busy working on the sci-fi novella I wrote in 2013 and then handed off to an editor earlier this year. The editor, Bree (who is wonderful, by the way), sent back an in depth critique that intimidated me for about a day — enough time for me to see the story that needed to be written. And that story was finally written. It took eight weeks, but it did indeed get written. Now, the manuscript’s back with Bree so she can do her wizardly editing magic. Meanwhile, the first of the short stories I wrote in November as a prequel to The Golden Orb is with the editor for that novel, Holly (who is also wonderful, by the way), so she can do her wizardly editing magic, too. Huzzah for wonderful, brilliant women who help make my stories better!

While words are being read and cut and criticized, I’ve been catching up on other life things, like taking a much needed vacation with my family. The vacation actually happened before the novella rewrites were finished, but it was still much needed. Being forced to be screen-free for a week because of lack of affordable wi-fi and no cell reception did wonders for my head space. I came back home refreshed and ready to finish that novella!

(We went on a Disney cruise, by the way. I highly recommend it if you ever get the chance. Disney knows how to do vacations, especially if they include fabulous food, excellent entertainment, and beautiful beaches.)

One of the few pictures of me from the entire trip, because I’m generally the family photographer.

The other photo taken of me along with my oldest and a certain swaggering pirate. He called me “Love”. Swoon.

My youngest in the ocean. That’s what pure joy looks like. 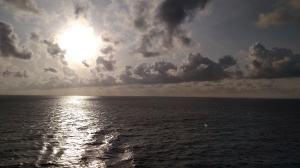 One of those moments that can only be captured in the morning on a boat in the middle of the ocean.

The other thing that’s taking up my time — besides being a mom and a wife and a friend and helping organize my local moms group and helping at my sons’ school — is my sewing. I just started working on a retro-style dress for a friend, which was put on hold during the novella rewrites. The pattern was chosen because I wanted to challenge myself as a seamstress and see if I could make a garment for someone else without doing a fitting first. Once the dress is done, I’ll move on to a few costumes I’m planning on cosplaying at a couple of conventions. Here’s a sneak peek at two of them: 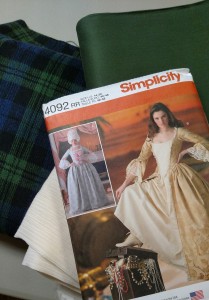 Can you guess what book/TV series this costume will be based upon? Four words: Scottish historical fantasy romance.

I was so excited to find this vintage suit (from the 40’s) in a thrift store in my hometown. And it fits. 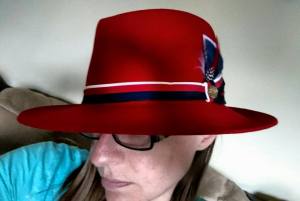 This is going to be worn with the suit above. Can you guess who I’ll be? Hint: a Marvel agent. A bad ass Marvel agent, at that.

So that’s all I have for now. I’ll try to have another update soon on the sci-fi novella and the short stories. The plan is to post the short stories here or on another website in serial form, eventually putting them together in an anthology. As for the sci-fi novella, I hope to self-publish it, but I’m not sure when that will happen. I’m waiting to find out what Bree has to say after she’s done with it and what kind of revisions the manuscript will need. And if I’ll feel confident enough to publish it at all.

In the meantime, thanks for reading.

Amanda Cook is a stay-at-home-mom and writer living in the rolling hills of southern Indiana. When she’s not caring for her family or obsessing over punctuation, she can be found helping out at her sons' school, catching up on her Goodreads list, playing (and sometimes winning, but mostly losing) board games with her friends, crying over her favorite PBS programs, or sewing yet another costume for the local gaming/pop culture convention, where she’ll probably lose at even more board games. Her second novel, "When We Were Forgotten," is the winner of the 2018 Bronze Medal for Best Sci-fi/Fantasy/Horror E-Book from the Independent Publisher Book (IPPY) Awards.

Make Me a Sammich